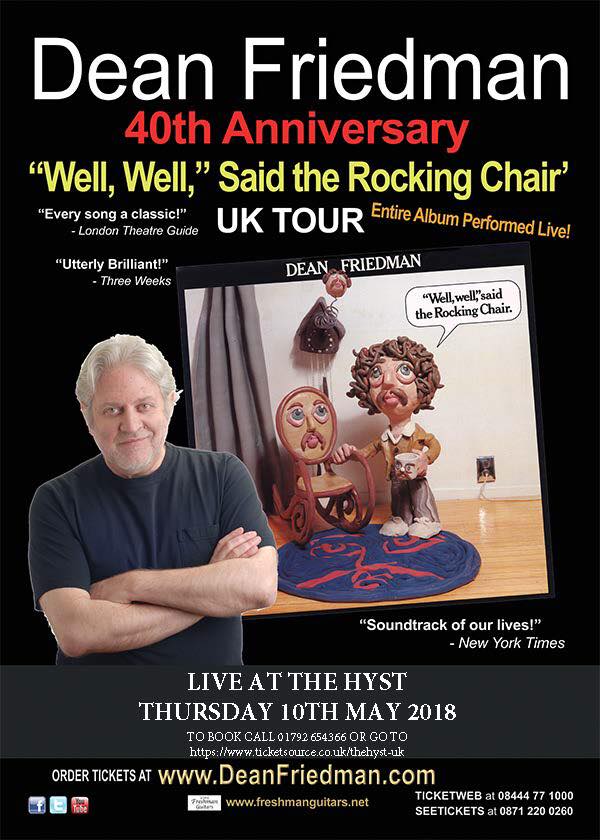 This week I’ve thinking a lot about 1978.  The reason is that next week Dean Friedman, the legendary American singer songwriter, comes to Swansea to perform the whole of his classic album ‘Well, well said the rocking chair’. He is currently touring the world playing all the songs from that album because this year marks the 40th anniversary of its release. The thing is 1978 doesn’t feel like 40 years ago to me but I suppose it must be…mustn’t it? 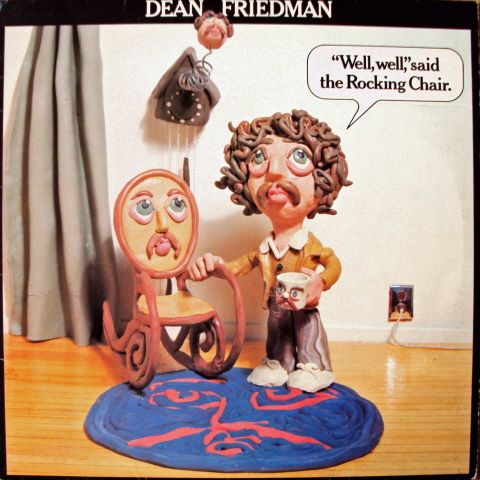 When he released that album it was at a time when if I heard a record on the radio that I liked I would rush into town and buy it.  Popping into town wasn’t that big a deal for me in 1978 because I used to go to town every day.  It was my final year in Dynevor Comprehensive and it was the year that I would sit my ‘A’ Levels, the year I would leave home.

1978 was year of a lot of terrific records that really left a lasting impression.  The first time I heard Wuthering Heights it made me stop in my tracks.  I couldn’t quite make out what Kate Bush was doing with her voice but I loved it.  Talking about unusual voices, the Bee Gees were in full falsetto swing with hit after hit and ELO released the classic ‘Mr Blue Sky’ which still sounds fresh today. Of course, there also big hits for The Barron Knights and Bony M but like all memories you tend to just remember the good times. 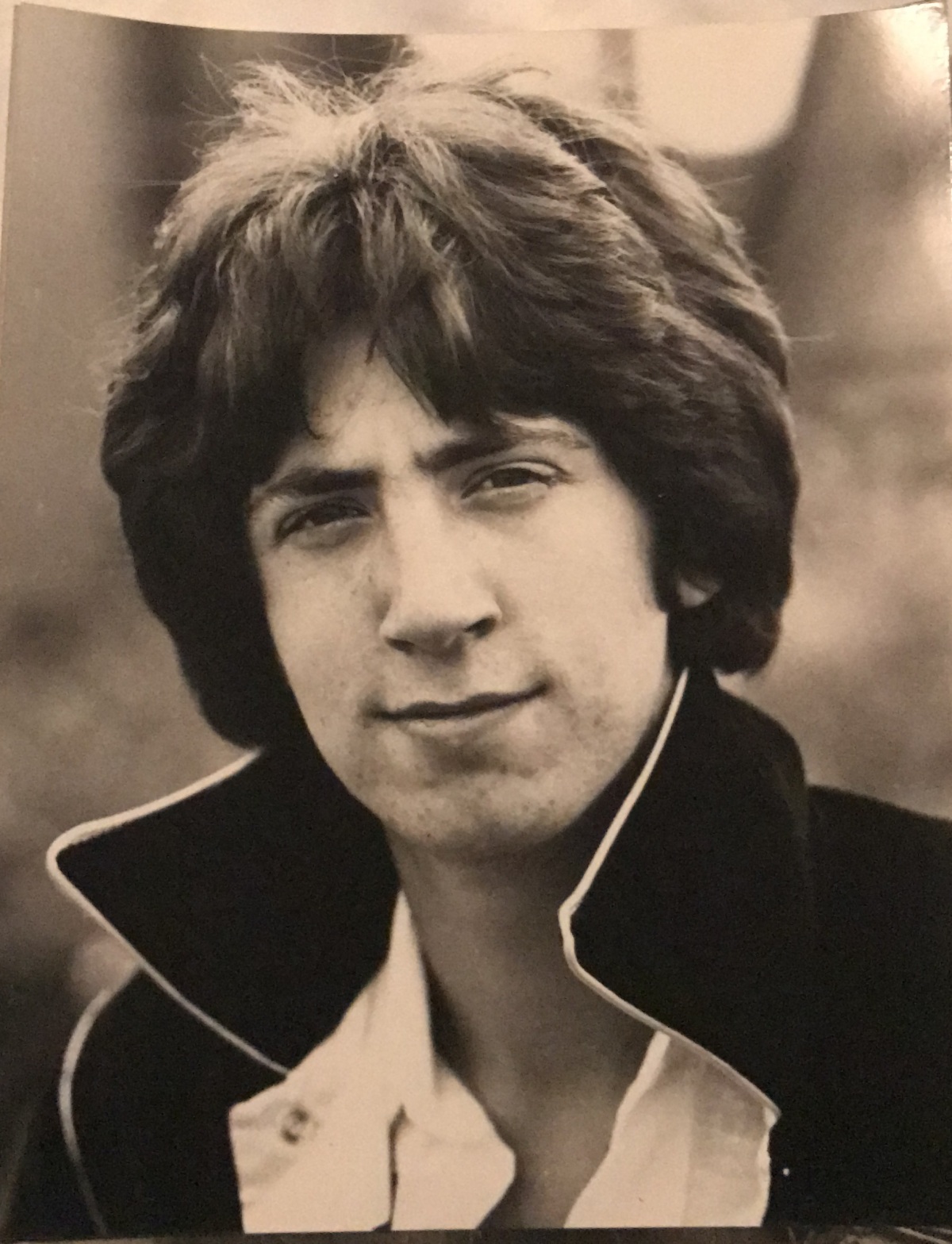 Looking back through rose tinted glasses 1978 was a great year.  I was young and the world was full of possibilities, but it was a different world back then. In that year Northern Ireland was still tearing itself apart and there seemed to be no possibility of a lasting peace solution. Margaret Thatcher was the first female leader of the opposition and Anna Ford became the first female news reader.  The Yorkshire Ripper was terrifying women in Leeds, Brian Clough was leading Nottingham Forest to the Division One Title and Swansea were starting their climb through the divisions under the guidance of their new young manager John Toshack.

Apart from my obsession with music and football my other great passion was the economic state of the nation. I was studying economics for one of my A Levels and I know it’s sort of sad to admit, but I loved it.   Britain had recently gone through massive restructuring after being bailed out of a financial crisis by the International Monetary Fund. Inflation was still running at 8.5% and unemployment was up to 1.5 million.  Every day I would read the Financial Times and try to work out whether a monetarist or Keynesian solution was best for the country.  A I say I know I was a little bit sad. Just like every year there were wars and rumours of wars, there were political scandals and there were tragedies but somehow all I really remember are the good times.

With all of this going on, with me growing my hair long and starting to shave for the first time, there was a new freedom. This was the year that I passed my driving test and then proceeded to borrow my dad’s car at every opportunity. One of the things I managed to negotiate with my dad was the purchase of a new, stereo, car radio complete with a cassette machine and an electric aerial.  It seemed that all of my rock star contacts in London had automatic electric aerials fitted as standard with the obligatory Rolls Royce Corniche convertible. We might only have had a 1.3 Ford Escort but we could still have a banging stereo system. 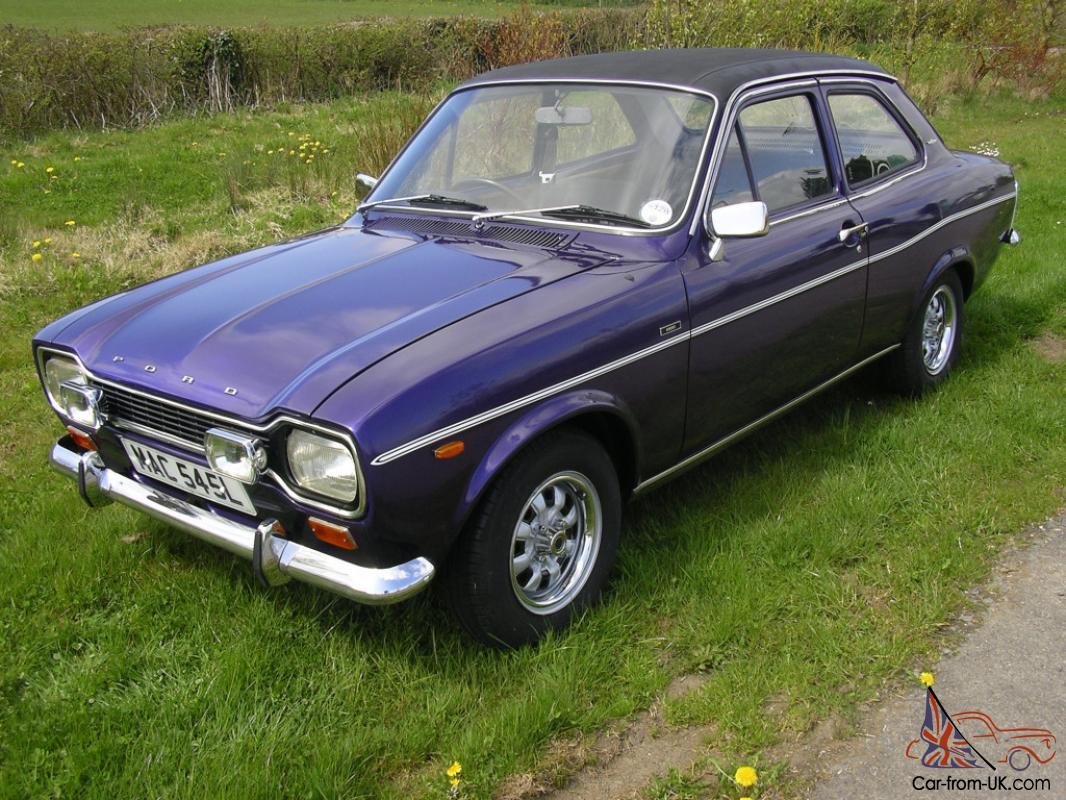 Because of all of these things music in the car was a massive part of my life and those songs from 1978 still mean so much. They were the sound track to my growing up. Back in 1978 I think the only Stereo Radio station was Swansea Sound. I still remember driving past the old Cwmfelin Steel works one morning when Mr Blue Sky came on.  I was blown away. Once I heard Billy Joel’s ‘Just the Way you are’ I bought the album, taped it onto a cassette (ask your grandparents kids, they’ll explain) and played it in the car until it jammed.  It took me hours to unravel and in the end I lost half of a song before I finally fixing it with some Sellotape.

It can be hard for an artist when early on in their career they write a book or paint a picture or make a record that defines them and against which everything else they ever do gets compared. Joseph Heller the author of the classic Catch 22 was once asked how did it feel to never write a book as good as that classic. He had the perfect answer, ‘It’s not a problem, because nobody else has either.’

40 years ago Dean Friedman released ‘Well, well said the rocking chair.’  The album was packed with hit songs, Ariel, Lydia, Rocking Chair and the chart topping Lucky Stars. Lucky Stars was an interesting song as it was proper duet.  What I mean was it wasn’t you take verse one and I’ll take verse two and we’ll harmonise in the chorus.  Lucky Stars was a conversation.  It was like we were overhearing 2 people struggling to communicate.  It was obvious something was going on in the background and it made you ask questions.  He had bumped into an old flame, Lisa, and she wasn’t doing well.  The lady in the duet wasn’t happy.

I think most artists hope for a hit record in the same way we hope that our lottery numbers will come up tonight. The success of Dean’s record seemed to take everyone by surprise.  At the time I was still signed to Rocket Records and I still distinctly remember the chase on from a lot of record companies to find out who was the girl singer on Dean’s record and get her signed up because it appeared she was just another singer who had done a session.  I bought the record and learned all of the words. It is a part of my growing up, it’s part of my story.

When I got an email earlier this year from Dean Freidman’s PR company telling me that Dean was touring with a special 40th anniversary celebration I looked at his tour dates and thought I wonder if I could get him to play at the Hyst.  I emailed the PR Company and they said why don’t you ask Dean.  They gave me his email address, I emailed him and he said yes.

It’s been strange over the past few weeks getting an email from an artist I admire so much.  He replies quickly and tries his best to make things work.  This week I asked him could he send us a little video inviting the people to Swansea to the gig and next morning there it was.

Looking back to 1978 the world has changed and so have I.  There are a lot of things I could do in 1978 that I can’t do anymore. Fairplay to Dean, I’m sure he has matured but success didn’t changed him and he still does the songs in the same key. Now that’s something a lot of the singers from 1978 can’t do!