In my career I’ve been lucky to sing at all sorts of venues, in fact as I think about it, the more unusual venues are coming back to me.  I have sung before a Welsh football game on the pitch at the Principality Stadium.  I once sang on the back of a tank transporter in a US Army base in Germany.  For years I would sing at the Welsh Labour Party’s Christmas Party in the Jubilee rooms of the House of Commons.

One weekend, as I tried to balance a last-minute invitation to join Art Garfunkel on tour with some long standing commitments, I managed to play St David’s Hall on a Friday evening, honour an engagement with my band The Jacks at the Garnant Con Club on the Saturday before heading to the London Palladium for a Sunday night.  The next morning I jumped on a bus and headed to East Germany where we performed at various forest amphitheatres, originally built for Hitler then used by the communist for rallies when the Iron curtain fell before becoming concert venues in the last 25 years.

In later years I’ve taken to building my own theatres.  It started with the South Wales Evening Post Theatre on Swansea High Street where Coastal Housing gave me 4 unused shop units to convert into a space for the Cappuccino girls to live for 24 weeks.

Now I call The Hyst on Swansea High Street my home with its own stage and built in PA system making shows easy to stage.

Wilfred Bramble from ‘Steptoe and Son’ (right). The perfect Scrooge

But there is still something very special about walking out onto the stage at the Grand Theatre in Swansea.  The first time I went there I was in junior school.  For some reason we must have been given a day off just before Christmas. Together with school friend Ian Govier I went to see ‘A Christmas Carol’ starring Wilfred Bramble, the ‘dirty old man’ from Steptoe and Son, in the role of Ebenezer Scrooge.  It was magical and in my mind’s eye I can still see the whole show. Over the years I’ve been to see bands perform and Pantomimes and then somewhere along the line I managed to find my way onto the stage. 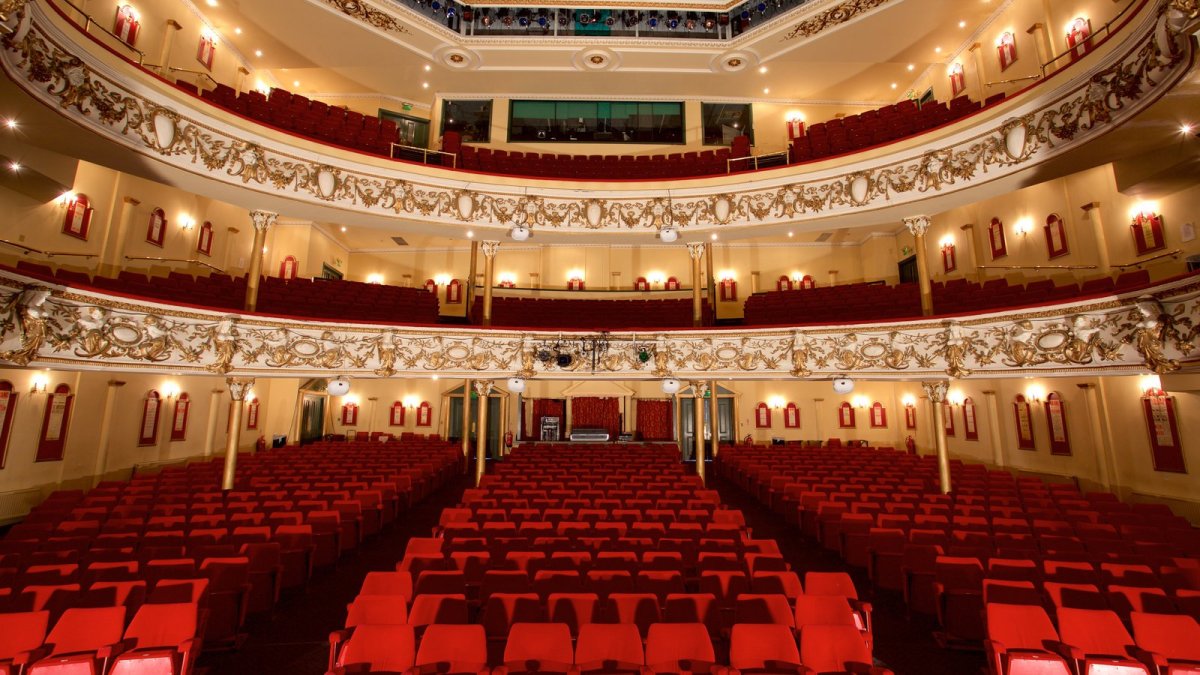 The view from the stage – Swansea Grand Theatre

I don’t actually remember the first show I performed at the Grand.  It might have been a charity night or the 10th anniversary celebration for BBC Radio Wales.  After that I was hooked and before long I had an annual show booked in before 1995 gave me my first taste of being in or part of a musical. The first residency I had at the Grand was for a musical I wrote with Iris Gower, Copper Kingdom. There are lots of fond memories I have of that show but the one that sticks in my mind most was a narrowly averted disaster.

In that show I played the Narrator and the opening scene started with me in the orchestral pit standing on the lift.  At the right moment the stage manager pressed the button and as if by magic I would slowly rise from the depths sending the first row of the stalls into panic as my bald head appeared from the darkness.  The disaster occurred on the night the lift failed.  Not entirely, just enough for my head to suddenly appear but for the rest of me to remain hidden.  The boys in the band, my friends, first panicked and then started laughing to themselves as they wondered how I would escape the pit and make it to the stage.  I knew I had one chance and whether it was my athletic prowess or the adrenalin that was pounding through my veins, but I made the leap and just pulled myself onto the stage. Put it this way, I couldn’t do it these days.

Last Thursday I was back on the stage for the BBC Radio Wales 40th Birthday.  All of my radio colleagues were there.  Owen Money who I’ve shared a stage with in clubs and TV studios across the country.  The Go Compare man Wynne Evans, Only Men Aloud, local heroes ‘Who’s Molly’ and the Morriston Orpheus all took their turn and all had a wonderful reception.

As I stepped out from the side of the stage it just felt right, like coming home as they say.  The view from the stage is strange and wonderful.  With the lights on full you can only just make out the first few rows but every so often as they dim and change you see more and more faces, then the balconies come into view and you feel very lucky.

The theatre is also a place where you cannot hide.  In radio or TV if you are recording a programme you can say, sorry that wasn’t very good, I made a mistake, can we try that again.  In theatre in front of a live audience you just have to keep going.  I always say that its not that a professional doesn’t make mistakes, its just that they know how to get out of them. On Thursday if there were mistakes, you wouldn’t have noticed.

That night there were some craftsmen and woman on display.  Owen Money is just such a craftsman.  He walks on stage, he owns the stage.  His suits, whether pink or red, like his one liners, are chosen to perfection to make the right impact.  On Thursday he didn’t miss a beat.  Years of experience allowed him to command the stage and take and answer every heckle or odd noise from the audience with the perfect riposte.  My advice to anyone in the room when Owen has the mike, just take it, you are never going to win.

Only Men Aloud interrupted a Christmas tour to join us for the night.  They were totally match fit as footballers say.  Every move, every line timed to perfection.  Wynne Evans is literally an ‘all round’ performer.  He can sing tell jokes and sell advertising all at the same time.

As I left the theatre I realised I missed the Grand more than I knew.  Next year I hope to be back with a major production in the summer to celebrate 50 years of Swansea becoming a city.  I’m nervous a little bit scared but most of all I am excited.  It will be good to once again call the Grand my home theatre.