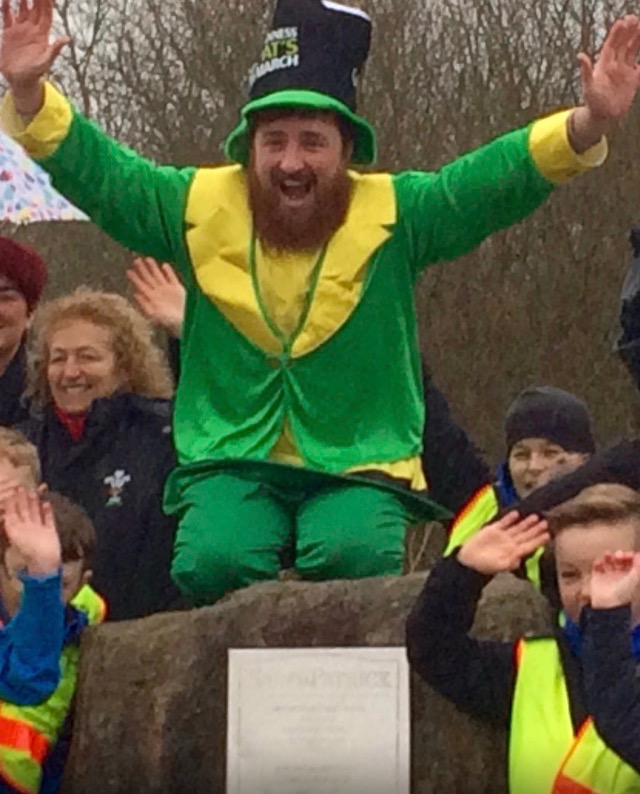 (A typical day in the Neath valley where the jolly folk of Banwen welcome visitors to the birthplace of St. Patrick!)

Yesterday we celebrated the life of one of Wales’s most famous sons.  In fact I’m pretty sure somewhere in the world right at this very moment people are still celebrating, or suffering from the ill effects of too much celebrating over the past 24 hours. It wasn’t anything to do with Gareth Bale or Dylan Thomas, it wasn’t Richard Burton or Lloyd George. No, yesterday the whole world celebrated the birthday of St Patrick, Patron Saint of Ireland. Welsh? Patrick himself said he was born in Bannavem Taburnie on the West cost of Britain and that at the age of 16 he was kidnapped by Irish Marauders and sold into slavery where he became a shepherd.

The Irish have been coming back and for to this part of the world for centuries.  In the past not every visit has been quite as much fun as last week’s green invasion for the rugby.  Modern slavery is very much a real life problem in Wales today and it seems barely a week goes past without some horror story hitting the headlines. But as my mum always says there is nothing new under the sun. 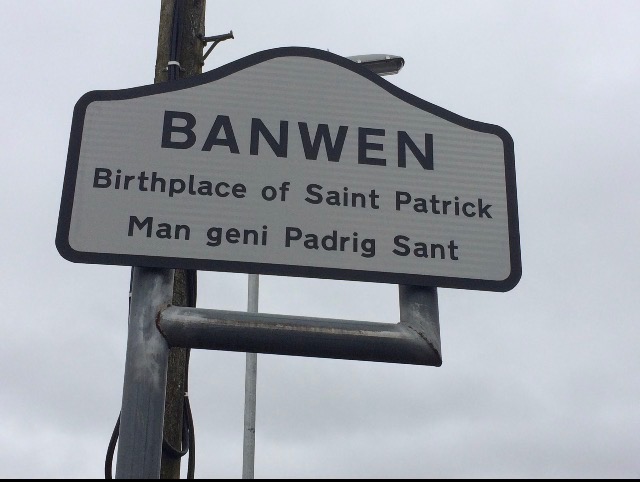 Many claim that their town is the real Bannavern Taburnie.  But we know beyond a shadow of doubt, and I’m sure the Welsh Tourist Board will also confirm that Bannavern Taburnie is the town we now know and love and call Banwen in the Neath Valley.  So many clues point to the truth of this assertion. Near Banwen there was a Roman settlement named Ricus. Ok there isn’t much to see by way of buildings and artefacts of the Roman heritage in that area these days  but the legacy can be seen in the place names.  Toncastell meaning the land of the castle or Ton-Y Fildre, the land of soldiers seem odd names for such a peaceful part of our world but those names go back to time when the Wild West was a really good description for this part of Wales.

Patrick was probably from a pretty well to do Roman family, his father was Deacon Calipurnius, his grandfather was a priest but it is said as a youngster he was not particularly bothered about the religious life. Maybe that changed when he was captured by Marauding Irish pirates. It is said he discovered a faith whilst in captivity and that praying helped him cope with being so far away from his family. I know the world is a very uncertain place for many but back then you would always have feared for your life because of pirates, marauders, war lords and that completely ignores the fact that we didn’t have the NHS or a Dental system.  Really, folks we’ve never had it so good.

Anyway. Maewyn Succat as Patrick was originally know ended up as a shepherd in Pagan Ireland until he managed to escape some 6 years later.  That faith continued to grow and he trained to become a priest himself.  Patrick says that one night he had a dream.

I saw a man coming, as it were from Ireland. His name was Victoricus, and he carried many letters, and he gave me one of them. I read the heading: “The Voice of the Irish”. As I began the letter, I imagined in that moment that I heard the voice of those very people who were near the wood of Foclut, which is beside the western sea—and they cried out, as with one voice: “We appeal to you, holy servant boy, to come and walk among us.

Now if I’m honest if I had managed to escape slavery the last place I would have wanted to do was go back and try to save the souls of those who had kidnapped me but obviously Maewyn or Patrick as he was now known, a name given to him by Pope Celestine 1, was a much more forgiving man than me and he went back. It’s said that at first he had a very rough reception from the locals but after moving around a little he eventually won them over baptising 1000’s and starting a Christian movement that still very much shapes the whole of Ireland.

Much of this is either myth or legend, except of course the bit about him being born in Banwen, but he certainly left his mark on the world.

For many his birthday means a chance to wear a big green top hat with an orange wig, or dye your hair green or simply drink yourself to oblivion but the underlying story of forgiveness, self-sacrifice and loving those who persecute you still sound a pretty good story to me. 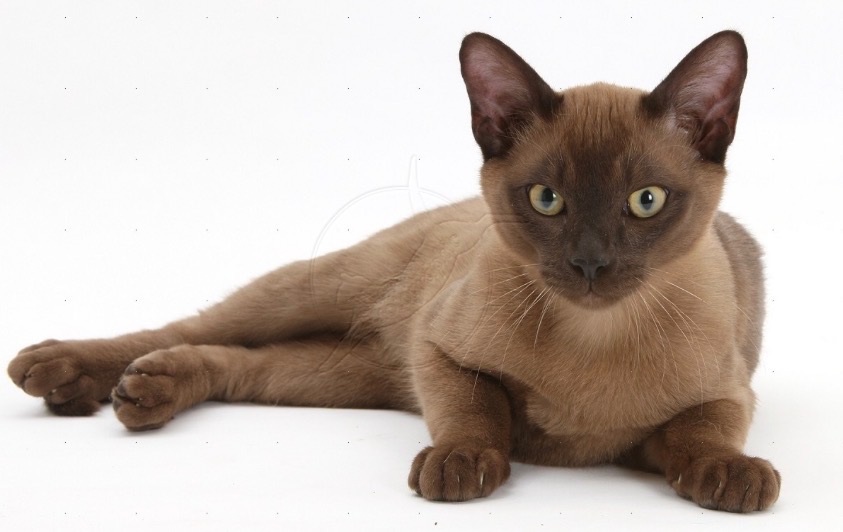 On the street where I live we have a very cheeky Burmese cat.  One of the characteristics of the Burmese cat is that they act very much like a dog.  Buddy never runs away from you. If you do walk up to him expecting a reaction it usually results in him rolling onto his backs as he expects you tickle his tummy.

He is also very nosey.  It wasn’t too long ago that one of my neighbours who comes from somewhere in the north of England rushed to my door to ask for my help.  All I heard through her thick northern accent was that there was body on her stairs and her daughters were terrified.  It turned out the body was actually ‘Buddy’ the cat and of course with being the courageous man I am I managed to save the damsels in distress.

This week I sat down in the car and suddenly realised I’d left something in the house.  I jumped out leaving the car door wide open. 2 minutes later I slammed the car door shut only to realise I was not alone.  Buddy the cat was on the front seat, well he was until I slammed the door.  Next thing I know he’s jumped onto my lap and I was screaming like a little child. Both of us had a moment of blind panic before I managed to find the door handle and let him out.

Maybe I’m not quite as brave as I think I am!