I remember walking into the Fellow’s Garden at Christ College Cambridge in 2005.  This was the 25th anniversary for those students who had matriculated in 1979.  This was the first time I had gone back to my old college as an ex student and I was worried that although life had been very kind to me it might be hard to keep up with the ‘bright young things’ who had surely gone on to run the world.  The first words I overheard were directed to an old guy who couldn’t possibly have been my contemporary. ‘Hello John, are still at the treasury?’

On closer inspection and following a few awkward conversations when it was perfectly clear that none of us could recognise the middle-aged men who now stood where young men had stood 25 years before, it turned out John was an old friend of mine. We had studied economics together.  His life had gone one way and mine another. John was just one of the many stars who had made their mark on the world.  One had become a famous publisher responsible for putting the ‘Bridget Jones Diaries’ onto the bestselling lists.  Others were diplomats or bankers or hedge fund managers.

Over the course of the weekend a strange thing happened, one by one these captains of industry all cornered me and asked the same question. ‘Did you really sing Fireman Sam?’  After a lifetime of touring the world with people like Art Garfunkel and Belinda Carlisle and writing songs for Cliff and Aled and the Hollies I had hoped my life had made more of an impression but no, Fireman Sam was the one thing they recognised form my back catalogue.  As I drove home that Sunday afternoon it really made me question my contribution to humanity. 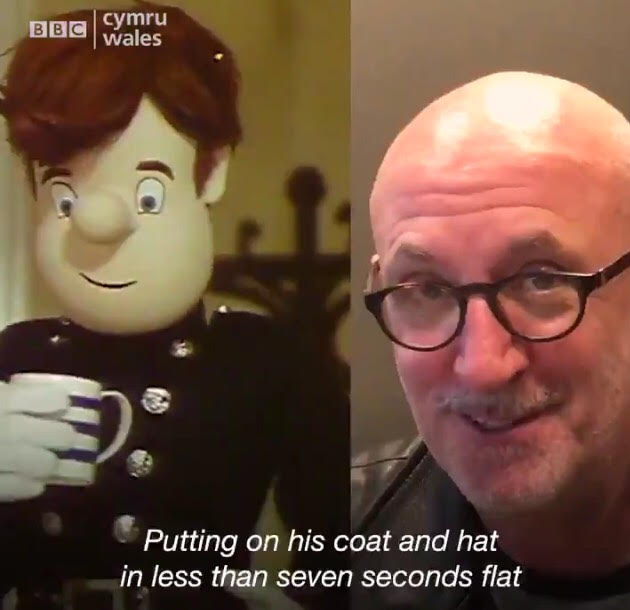 The hero next door, funny you never see us together???

Yesterday it all came back again.  On the 30th anniversary of the first screening of Sam Tan, the Welsh language version of the same cartoon series, I found myself having to talk to newspaper and radio stations around the country.  All the people who called or emailed to set up an interview all shared the same thing in common.  They were all in their mid to late 30’s.

What I found was that none of them were getting in contact to take the mickey out of me or try to make me feel my artistic career was a complete and utter failure.   Without exception these hard-bitten young journalists all loved the hero form Pontypandy. Although they were supposed to be calling to ask me to tell my Fireman Sam story they all wanted to tell me how much Sam meant to them.  They had watched with parents, or grand parents, brothers or sisters, aunties and uncles.  This was a different time before computers and mobile phones.  This way of watching Fireman Sam was usually a shared experience whether it was on TV or maybe a video or in later years a DVD and they loved him and the memories the show brought back to them.

In fact all day yesterday I felt a bit like a drowning man as my past life flashed before my eyes.  It started with Fireman Sam and ended up later in the day with John Peel.  As Christmas approaches radio producers are trying their best to stock up on specials to fill the hours when the radio stations are manned by skeleton staff.  One series being recorded at the moment is about the John Peel Welsh connections.

The series was inspired by a writer called Ken Garner who had written the book The Peel Sessions.  I knew the book because my kids had bought it for me for Christmas some years ago.  The interesting thing reading that book was he had the exact details of each of my 3 Peel Sessions.  The first session I remembered in minute detail. From the moment the letter arrived inviting my dad to contact the John Peel office to the day itself meeting Jimmy Young and Johnnie Walker.

My autograph book from the First Peel Session day. 8/10 for spelling!

The second session at the legendary Maida Vale studios was a little more or a blur.  The ‘radio session’ was in amongst a number of ‘proper’ recording sessions I was doing at the time in my school holidays.  By then I had been a bit spoilt by having backing musicians and orchestras.  Without the aid of Ken’s book I would have no idea which songs I recorded that day. The things that stand out from the session was meeting an odd American who was a student at Oxford University who was starting to broadcast on Radio One’  He had a strange name which I found hard to remember. Paul Gambaccini talked fast always made me laugh.  The other memory was walking into the BBC Maida Vale bar after the session with these long-haired Radio 1 hippy types to ne greeted by disapproving looks from David Coleman and his colleagues from the sports department.  They were clearly not impressed by a kid and a bunch of weirdos invading their sports bar.

Ken then asked me about my third John Peel session and I have absolutely no memory of that session at all.  I suppose by then I was doing so many broadcasts and interviews that it had become ‘ordinary’.  Blaise or what? Ah!, the folly of youth.  My dad told me at the time I should keep a diary of all of the amazing adventures I was having and like all kids I knew better.  Now it’s only the big highlights that stand out with the details lost forever.

Having said that a more recent production is now making a claim on my brain.  I remember one Christmas after our first run of Cappuccino Girls getting a call from a lady asking was the production on and did it run every Christmas. Although at that stage there were no plans to bring the show back at the time that struck me as a good idea.  So here we go again, 4 shows up to Christmas at the newly refurbished Hyst on Swansea High Street.

The Cappuccino Girls are back for Christmas.

Having had a summer season of the original show in Mumbles this year you would think it would be easy to restage.  So did we!  It’s amazing how much you forget in a couple of months.  Well, we have 3 more rehearsals before we open next Thursday so what could possibly go wrong.

Fireman Sam and Cappuccino Girls, it really has been a strange career and those odd opportunities still keep coming, I wonder what John Peel would say?