Mal Pope was born in Brynhyfryd, Swansea on 18th May 1960. There was always plenty of music in the house with either Mal’s mum or grandmother playing the piano. Mal’s grandmother, Myfanwy, was only just over 5 foot tall but she was a very accomplished organist.

One of Mal’s earliest musical memories is watching her feet dancing over the pedals as she practiced for some big church event or another. In fact the chapel and gospel music would play a very big part in Mal’s musical development. His great grandfather had been the conductor of one of the local chapel orchestras around the turn of the last century and had made quite an impact as a hymn writer.

Making music and going to church would become second nature as he grew up. The Gospel Hall in Manselton, Swansea where Mal was taken to as a babe in arms was unusual in that musical instruments were not allowed to be played on Sunday mornings. The reason was that it would interrupt the worship experience for the one who had to play. Instead, everyone sang, not in unison, but in harmony. In seemed quite natural for a lad brought up in that environment to pick a note and join in.

Life was to change in 1967 when Mal’s eldest brother David went on a school trip to Spain and came back with a guitar. Mal would borrow it when his big brother wasn’t there and inspired by David’s record collection (Cat Stevens, Simon & Garfunkel, Donovan) he would try to play it. Two years later he had started to write his own songs. At school Mal was encouraged by Peter Williams, a bongo playing young teacher who would make Mal play his songs in front of the school at the drop of a hat.  Band practises consisted of a couple of kids and the teacher sitting down to learn the latest songs by Ralph Mctell or the Beatles.

Although not really old enough to go to the Sunday evening youth group at another local church, occasionally Mal would be allowed to go so long as he would play his songs to the very appreciative audience who would go to Mike Nicholson’s house after the service.

A couple of years later it was Mike who suggested that Mal send a tape of his songs to John Peel on BBC Radio1. John Peel had championed many new artists, from Elton John to Marc Bolan, but as his programme started at 10 o’clock, after Mal’s bedtime, Mal had no idea who John Peel was. Sending a tape off blind Mal waited eagerly for the post.

A couple of weeks later a letter dropped on the mat inviting Mal to go to London to record a session for John Peel’s show ‘ Sounds of the Seventies’. Dressed in a new suit and accompanied by brothers David and Gareth, off he went. John Peel trailed the session for weeks and even contacted his friends to make sure they listened. (See Link.)

Six weeks passed and Mal signed to Elton John’s newly formed Rocket Record Company. The reason Mal’s parents said yes was down to the fact that the managing director, Steve Brown, had been brought up in the Salvation Army and that was good enough for them.

Over the next six years Mal would spend most of his school holidays going to London to record. At the first session a telegram was waiting from Elton wishing Mal all the best. Elton at the time was touring the USA but after 48 cities coast to coast.  Elton drove straight from the airport to meet Mal and his Dad at the Rocket offices. He had to be quick because Mal had to catch a train home that night. He had school in the morning!As well as guiding Mal’s musical career Elton and the Rocket Record Company went out of their way to spoil Mal, treating him as the record company mascot.

At Elton’s famous Christmas parties Elton would take him around to meet guests like Ringo Starr,and Harry Nilsson and make sure they signed Mal’s autograph book. He would also take Mal training with his new Football club Watford FC. One of Mal’s great claims to fame is beating Elton at Subbutteo football.

David Costa produced Mal’s early sessions and a debut single ‘I don’t know how to say Goodbye’ nudged the lower reaches of the charts. The trouble was that in-between recording session’s nature was taking its course and Mal’s voice was noticeably changing.

Some internal changes at the Record Company saw Steve Brown leave and Gus Dudgeon, Elton’s producer, taking a more active role in Mal’s career. These all night sessions featured members of Elton’s own band and were squeezed in with mixing sessions of Elton’s new album ‘Captain Fantastic’. In fact Gus Dudgeon was always keen to remind Mal that he had cine footage of Mal fast asleep in the studio as Gus mixed Elton John and John Lennon live at Madison Square Garden.

Another single ‘When You’re Away’ was released but as had happened a couple of years earlier internal changes at Rocket led to Gus Dudgeon leaving and Elton himself taking on the role of Record producer.

Mal arrived at Abbey Road as Elton was putting the finishing touches to a Charity record he was making with Eric Morecombe. The results of these sessions were another single ‘If I wasn’t there’.

Not long after this Mal signed to Harvey Goldsmiths new management company AMP. It had been set up by Harvey and Pete Brown (Steve’s brother) after Pete had tired of working as a personal manager for Queen.  It was at this time that Mal eventually left Rocket Records.  At the time he was actually studying Land Economy at Christ’s College Cambridge and travelling down to London on his days off to record new songs.

After leaving University Mal moved to London and started writing songs with, Andy Piercy, the lead singer of another band signed to AMP, ‘After the Fire’. When After the Fire split up after long months touring America supporting Queen and Van Halen it proved impossible to bring them back together even after their last single ‘Der Kommissar’ went top 5 in the States.

Months of recording led to the completion of a new album and plans were well underway for an American tour when new management at the record company led to the album being dropped.

Frustrated and very disillusioned, Mal headed for home and started working at BBC Radio Wales as a researcher.  One thing led to another and within a year he had become a producer with an emphasis on music production.

He moved to television but another session of new songs played by Andy Pebbles on Radio One led to Mal signing a new record deal with Larry Page, legendary 60’s record producer and manager of the Kinks and the Troggs.

For the next 5 years Mal moved from project to project, reaching the final of the British Song for Europe, Producing Aled Jones, singing title tracks to cartoons ‘Fireman Sam’ and ‘Superted’. Mal had always managed to combine broadcasting and songwriting with touring and producing Gospel artists.

When HTV approached Mal with the idea of producing an hour special for Easter it was the perfect opportunity for Mal to ask old school friends Tony Kiley and Andy ‘Wal’ Coughlan to come home to put together a record they should have made 10 years earlier.  Tony, Wal and Mal had played in a band ‘Malvin Bishops Originals’ in 1978 but had split up with Tony going on to join The Blow Monkeys and Wal going on to play for Gary Numan.

A CD was released, ‘Love Will Find A Way’ on Mal’s own record label MPH Records.  The one off show led to a late night Music Series ‘The Mal Pope Show’ with the same band performing the role of houseband and guests such as Paul Young, Mica Paris, John Cale, Justin Haywood, Cliff Richard and the Bee Gees joining for jam sessions. The show went on to win numerous awards at the BAFTA Cymru Wales annual television awards.

A musical ‘Copper Kingdom’, commissioned to celebrate Swansea hosting the 1995 Year of Literature and Writing Festival led to an album of the same name being released with the single ‘Cover Me’ going to being playlisted on BBC Radio Two.

When Lasse Olssen, a Swedish tour promoter heard the album he knew he had found the perfect support artist for a tour he was planning of Europe featuring Art Garfunkel For 3 months during 1997 Mal criss-crossed Europe building up a loyal fan base, writing and performing new songs almost daily and making invaluable contacts.

Over the past few years Mal has continued to release albums on a regular basis.  He has toured with Belinda Carlisle and written a new musical ‘Amazing Grace’.  Future projects include another new musical ‘Contender’ based on the life of Boxer Tommy Farr and further albums. 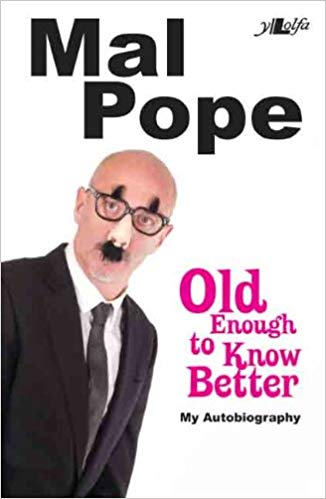